Welcome to the website of Kadrina Church Organ Foundation!

Foundation was established in 2004 by the St. Catharina Parish of Estonian Evangelical Lutheran Church in Kadrina / Estonia, to gather donations for the renovation of the historical Herrmann-Organ in Kadrina St. Catharina Church.

The organ of the Kadrina St. Catharina Church (1877, II/14) was built by the organbuilder Carl Alexander Herrmann (1847 – 1926) from historical Courland (Libau/Liepaja), nowadays Latvia. C. A. Herrmann studied organbuilding by his father Carl Paul Otto Herrmann (1807 – 1868). In two generations built these two organbuilders from Courland more as 180 organs to Latvia, Lithuania, Estonia and Russia. 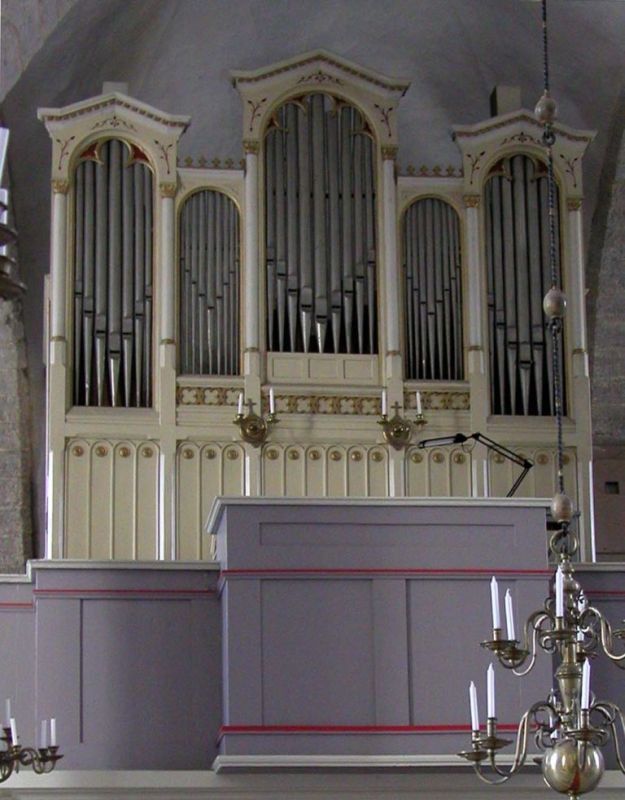 The organ was ordered in 1877 for the Jesus-Church in St. Peterbourg by the local german-latvian parish. Latvian newspaper “Latviesu Avizes” (“Latvian Newspaper”) from the year 1878 writes: “Organbuilder Hermannis from Liepaja has for 2200 rubels built a new organ with 14 stops, which is on the 15th of September in 1877 accepted by a speciality commission. In this commission were prof. Homilius - the organist from St. Petri Church and Mr. Wissendorf - the organist from St. Anna Church. The accepters confirmed, that both the build solution and sounds of the organ are well realized." (“Latviesu Avizes” 13. 09. 1878, N. 37). Success by this work brouhgt for C. A. Herrmann a lot of new contracts in St. Petersbourg and he could work there up to year 1895.

On the same year - 1895 - decided the council of Kadrina St. Catharina Church in Estonia to replace the old organ in their church with the new one. The old organ was smaller, with one keyboard and was built by the organbuilder Johann Andreas Stein from South-Germany. J. A. Stein (1752 - 1821) was a wellknown organbuilder, who worked the second half of his life in Baltics. There is an information in the Chronics of the Kadrina Church from the year 1897: “In December 1895 became church for 1350 rubels a new organ with 18 stops. Money to purchase this instrument was taken from the amount of the lightning and decorating the church. The organ was bought from the Latvian Jesus Church in St. Petersbourg and was installed in Kadrina Church by Mr. Hirn, the representative of the Firm Rieger&Cie. The organ has powerful sound and it justifies it' s purchase in every sense. The old organ of the St. Catharina Church was sold to the small chapel in Käsmu / Wiek.” (Kirchen-Chronik, pag. 366, EAA, 1227, 1-31-103).